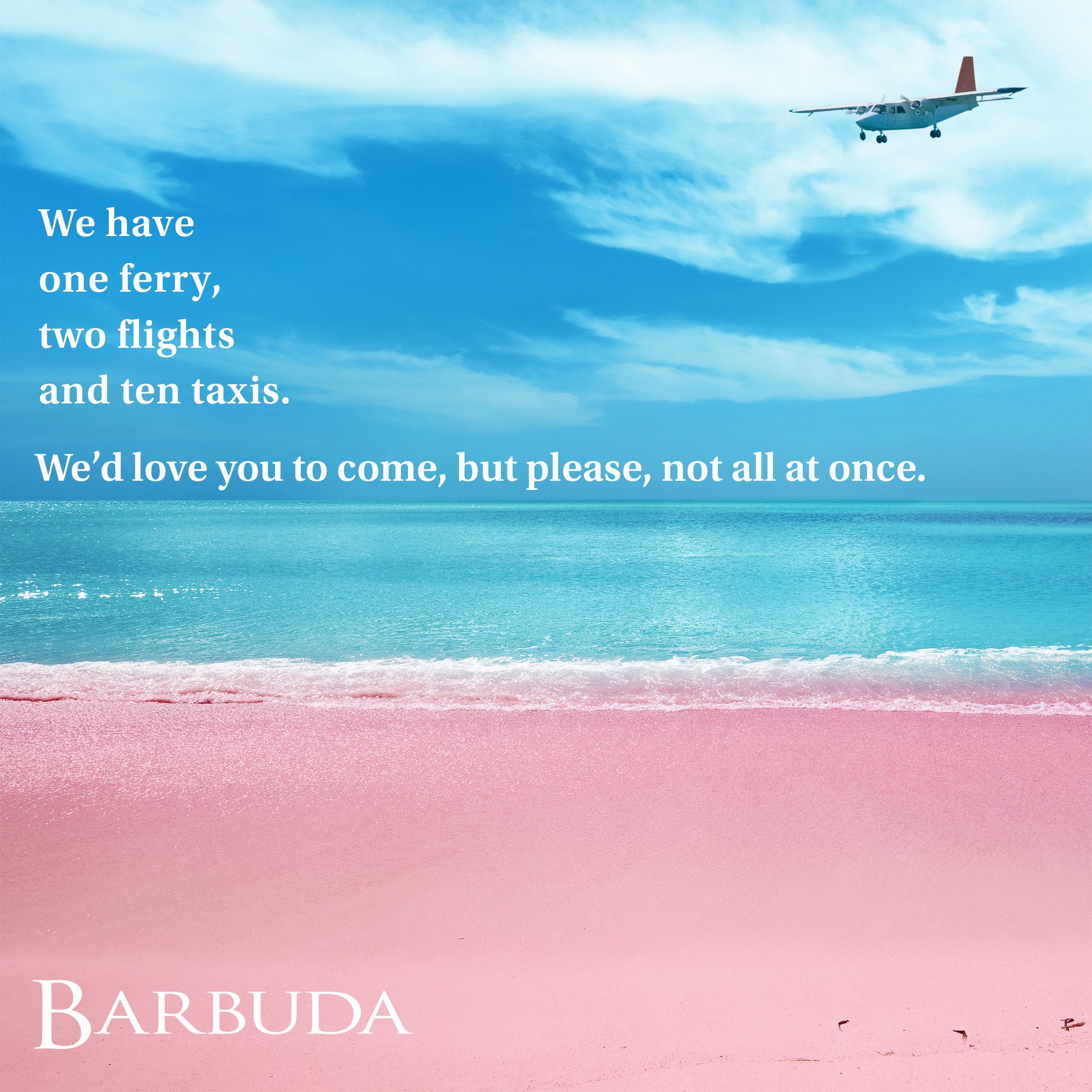 CODRINGTON, BARBUDA (March 21, 2022) – With the ambition to increase awareness of Barbuda and to promote more visits to the island, the Antigua and Barbuda Tourism Authority (ABTA) has partnered with the Barbuda Council and UK creative agency Motel on the first ever campaign to promote Barbuda.

Antigua’s sister island, Barbuda despite being famous for its endless pink sand beaches, has virtually been untouched by tourism. That’s not without good reason. With a much smaller population (only 1,500 people) than Antigua, you can currently only get to Barbuda by boat, helicopter or in a tiny eight-seater plane.

With the limit on the number of visitors that can be accommodated at any one time, the Antigua and Barbuda Tourism Authority’s launch campaign with the Barbuda Council and Motel, aims to position Barbuda as an off the beaten track island escape, but unlike your usual tourism advertising, this campaign doesn’t plead with customers to visit.

The iconic pink sand eleven mile, Luis Beach is the stunning setting at the heart of the campaign.  Given there is only “one ferry, two flights and ten taxis”, viewers of the advertising are encouraged to come and visit, “but please, not all at once.”

The Country’s Tourism Minister The Honourable Charles “Max” Fernandez has endorsed the creative approach that the new campaign has adopted to bring the international spotlight on Barbuda: “This campaign cleverly helps manage expectations because if interested travellers can’t book a flight or room, they will understand exactly why. More than that, we hope that this idyllic campaign truly captures the uniqueness and warmth of the local Barbudan community and is in keeping with our strategy to show the world the unsurpassed beauty of the sister island.”

Colin C. James, Chief Executive Officer at the Antigua and Barbuda Tourism Authority comments: “We have spent many years marketing Barbuda as part of the overall Antigua and Barbuda package.  Barbuda is a special place in its own right and has an increasing number of unique things to offer. Motel’s understanding of both how to create impactful, memorable advertising along with their knowledge of Barbuda as a destination and what makes it so unique, made them the perfect agency to work on our brief.”

Shot on location in Barbuda by local photographer Mohammid Walbrook and Motel Creative Director David Boynes, the campaign will be running across Press (in titles including Condé Nast Traveller and Wanderlust), DOOH, Social and travel media such as TripAdvisor in the key ABTA markets UK, US and Canada from March 21, 2022.

Calsey Joseph, Tourism & Culture Chairperson within the Barbuda Council says, “We anticipate that Barbuda will be marketed at its peak throughout this campaign. Barbuda offers many opportunities for the perfect getaway – a chance to enjoy nature, the pink sandy beaches, the weather and our popularly known seafood cuisines. Barbuda, we live it…you’ll love it.”

In the campaign’s two aerial films, shot by a drone, you can see the silhouette of the tiny passenger plane flying above the water across the eleven miles of Luis Beach. This is accompanied by the gentle background sound of lapping waves, and the national bird the majestic Frigate, interrupted only by the gentle hum of the light aircraft overhead. Barbuda is home to the largest Frigate Bird Colony in the western hemisphere, with over 100,000 birds living there. You can only visit this sanctuary by boat with a tour guide, which only adds to the Island’s exclusivity and charm.

Rob Smith, Founder and CEO at Motel adds, “Antigua and Barbuda are both very special islands. There is a particular magic to Barbuda though, which you feel as soon as you touch down. We are incredibly privileged to have been trusted with the brief to create the island’s first-ever campaign”.

The last 5 years have been a period of rebuilding following the devastation on the island as a result of Hurricane Irma. Alongside previously popular hotspots such as ‘Uncle Roddy’s’, the development of the Barbuda Ocean Club is nearing completion, there is a Nobu restaurant on Princess Diana Beach and the island has its first eco-hotel which can only be reached by boat (Barbuda Belle).