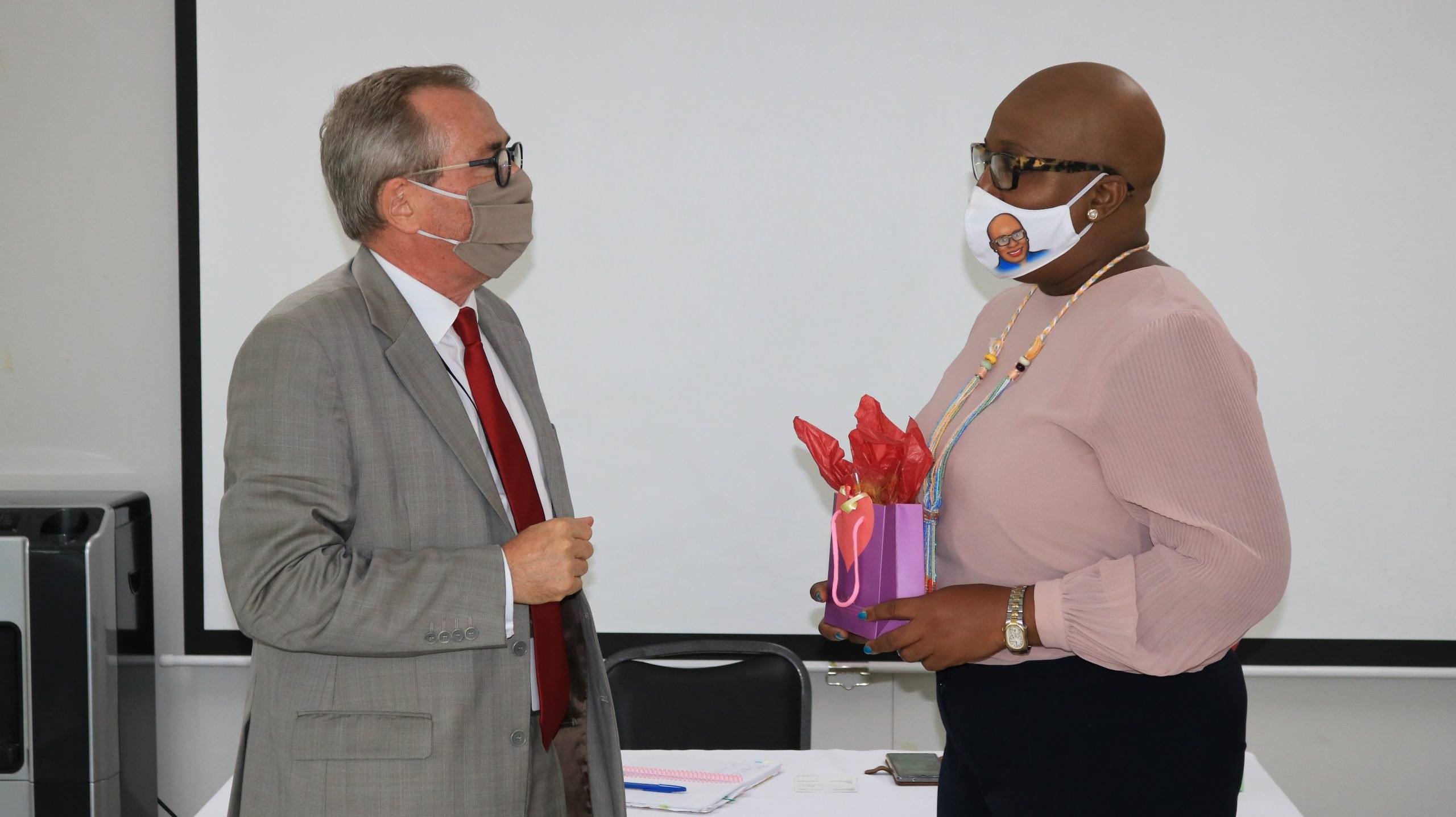 On Tuesday May 19th 2021,  Minister for Education, Innovation, Gender Relations and Sustainable Development Hon. Gale Rigobert, chaired a meeting with representatives of the Department of Education and the  Ambassador of France, His Excellency Jacques-Henry Heuls and Mme. Christel Outreman, Regional Counsellor for Cooperation.

At that meeting Dr. Rigobert expressed her profound appreciation to the French delegates for the good work that France had done with Saint Lucia in areas of mutual cooperation. “I wish to thank you and your Government for the assistance we have received in the areas of social development (health and education); Cultural exchanges as well as support for our various Climate Change and Biodiversity initiatives,” Dr. Rigobert stated.

The Minister reminded the meeting that among other endeavors, in 2018, a delegation visited Guadeloupe to discuss ways of managing the troubling sargassum seaweed issue.

She also praised the delegation for the “RePLAST-OECS” project primarily funded by the French Ministry of Foreign Affairs, aimed at tackling the problem of single use plastics.

Where Education is concerned, Dr. Rigobert pointed out that Saint Lucia has benefitted from a number of exchange programs to Martinique involving Physical Education and French teachers and students alike.  According to PS Michelle Charles, this initiative has exposed the potential for the Saint Lucia Sports Academy to attract students from the French territories.

Saint Lucia has also benefited from a number of twinning programs involving Secondary schools here with sister schools in Martinique.

With respect to Sir Arthur Lewis Community College, Dr. Keith Nurse spoke of the twinning of SALCC with sister institutions in Martinique, with an emphasis on hospitality training and culinary arts. The school of Agriculture at SALCC he says also presented opportunities for students from Guadeloupe and Martinique to come over to Saint Lucia to study our Agriculture practices while learning English as a subject.

Dr. Nurse outlined a number of new initiatives by the SALCC including the Gateways to Global Careers program and the teaching of Creole which he says can create an appetite for French.

His Excellency Jacques-Henry expressed a commitment to the continuation of strengthening ties between Saint Lucia and the French Territories. He added that the islands were too closely tied by History, Geography, Culture and Trade not to do so.

Mme. Christel Outreman outlined a number of new as well as continuing endeavours by the French Embassy here in Saint Lucia, including a new team at the Alliance Francaise. The center she explained will now boast of improved spaces dedicated to French information and learning. Private schools she says, are being provided with French corners and the institution will be embarking on new cultural programs, debates training and summer camps.

The French team made mention of a recent call for proposals to the tune of 5,000 Euros for Micro Projects in the priority areas of organic/sustainable agriculture, environmental/coastal protection, improvement of gender equality, cultural action, innovation, digital and support for sports initiatives.

Hon. Dr. Gale Rigobert concluded the meeting by reiterating that the Government of Saint Lucia was pleased with not only the continuation of diplomatic relations with France but with the deepening and strengthening of that relationship in several areas.

Just last December the Ambassador of France signed an inter-governmental agreement within the framework of the Debt Service Suspension Initiative (DSSI) with the Prime Minister of Saint Lucia, Honourable Allen Chastanet.

Saint Lucia became eligible to benefit from this initiative by the Paris Club, with the approval of the G20.