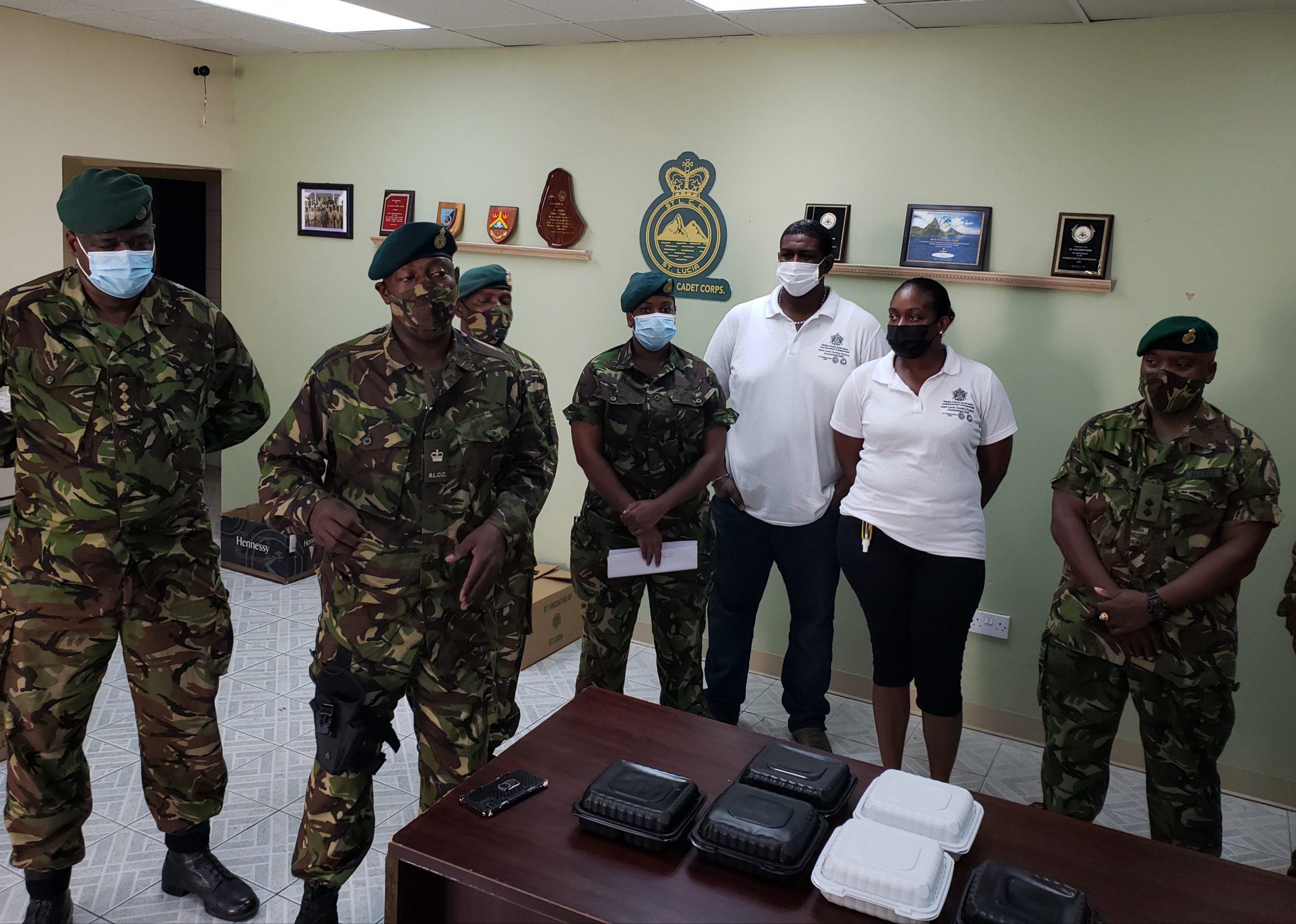 The Saint Lucia Cadet Corps, a non-profit paramilitary organization, which seeks to inspire young people to achieve success in life, with a spirit of service to their local community and country, continues to lead by example. Over the past few Sundays, during the 24 hour curfew due to Covid-19 measures, members of the 3rd Battalion of the organization have been going to various communities to feed the needy.

Major Deland St. Jules of the Saint Lucia Cadet Corps, explains how the initiative came about.

“We are happy to be here today as part of this initiative which was conceptualized by one of the members of this group, the Saint Lucia Cadet Corps, in the name of Captain Elize,” St. Jules says.

“One evening while we were having a Battalion chat, Elize suggested that because of the protocols put in place to control the spread of Covid-19 –  we had this lockdown Sunday, the idea started with a desire to feed the homeless, who would not be able to get a meal. The SLU Cadet Corps was able to partner with The Ministry of Equity, NEMO and other Social partners,” he explained further.

The organization has so far been able to come up with some healthy meals for the homeless from the first implementation of the lockdown Sundays visiting the areas of Gros Islet, including Grande Riviere,  Bois d’orange and Monchy as well as Anse La Raye and Canaries, bringing some relief to the less fortunate.

According to St. Jules, officers within the organization have contributed personally to this project which is ongoing.

“I am appealing to anyone interested in supporting the cause to contact the SLU Cadet Corps through our Facebook page so that we can do even more for the needy persons within the communities,” he says.

The food is being prepared by the officers within the SLU Cadet Corps; with some prepping being done overnight, while the actual cooking is done on Sundays so that the meals can be delivered fresh and hot to these needy persons in the community.

The Saint Lucia Cadet Corps in 2020 when the island faced its first lockdown was also at the forefront of the Government’s national initiative to feed the homeless. The organization is well known for their humanitarian service over the years, and St. Jules says that they will continue to build on this foundation of serving the community.

“The Saint Lucia Cadet Corps by itself is a non-profit community service organization, used to develop young persons into leaders and with a strong concept of community service. Over the years the SLU Cadet Corps has been serving Saint Lucia, particularly during disasters such as hurricanes and the cadets give it their all,” St. Jules says. We have a long history of service to Saint Lucia, especially during such pandemics and disasters,” he added.

The 3rd Battalion of the Saint Lucia Cadet Corps will continue its latest initiative of bringing some form of relief to the homeless during the lockdown Sundays!